Why to Vue.js and What It Can Do for Your Company 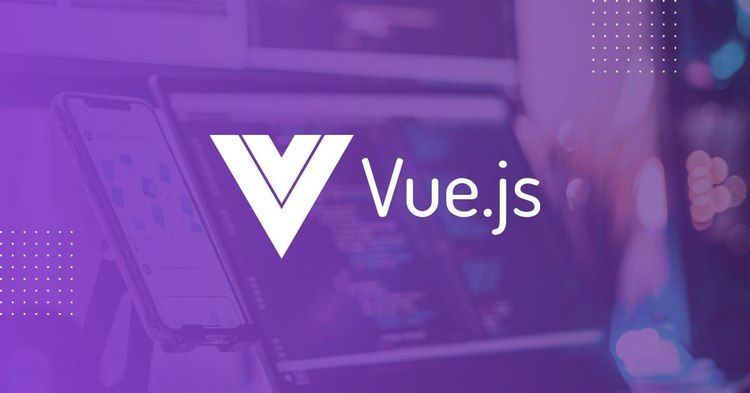 In the world of JavaScript frameworks, most of the buzz revolves around Angular and React, but there are many more players out there that deserve equal share of the attention. One of them is Vue.js.

Why to Vue.js and What It Can Do for Your Company

In the world of JavaScript frameworks, most of the buzz revolves around Angular and React, but there are many more players out there that deserve equal share of the attention. One of them is Vue.js.

Although Vue.js is younger compared to Angular and React, it’s garnered a lot of popularity among developers over the years.

Below are current stats from GitHub:

And here’s how the popularity for each of the three was changing in time: 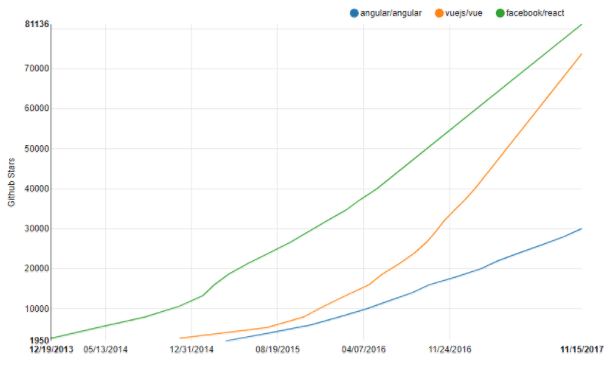 What Are the Benefits of Vue.js?

Vue.js is first and foremost easy to learn and adopt. With an in-depth documentation and best use cases available on the official website, developers can quickly jump right into developing their code.

Even though there are many tutorials out there, from coding robust apps to simple to-do lists, guides provided on the official Vue.js site are perfectly succinct to get started.

Also, to get going with Vue.js, no external libraries are necessary nor are any additional plugins.

Here’s how Evan You, the Vue.js creator, describe his framework, “Vue tries to pick the middle ground where the core is still exposed as a very minimal feature set, but we also offer these incrementally adoptable pieces, like a routing solution, a state management solution, a build toolchain, and the CLI.”

Indeed, Vue.js’s approach gives developers flexibility, allowing them to begin coding quickly, adding more features as per project needs. This, in turn, translates into improved delivery time—it’s not necessary to learn all the features and capabilities of the framework to develop a functional web app.

Vue.js, just like React and Angular, uses the much lauded components—defined pieces of code that can be reused when building big apps. It’s a feature greatly appreciated by developers, for it saves time and a lot of hassle when developing large and robust apps.

With an unpackaged version of Vue.js, the developers see mistakes in their code as they write it. This speeds up the developing process considerably, plus it allows devs to learn how to fix them without much delay and distraction in their work.

Weighing around 23kb, Vue.js is a lightweight framework compared to Angular (143k gzip) and React (43kb), which has its reflection in startup time. But in the large scheme of things, the benchmark results of React, Angular, and Vue.js are comparable. 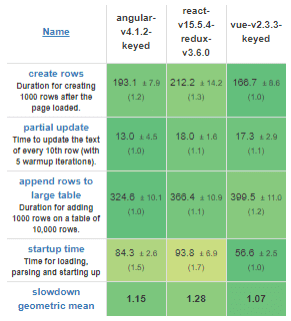 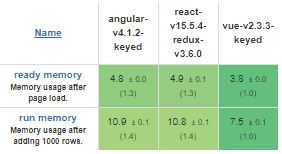 For an in-depth performance comparison of various js frameworks, visit Stefan Krause’s site. Note, however, that there are ways in which frameworks can cheat benchmarks and thus score higher.

Vue.js is a universal framework and can be used when adding components into existing web apps as well as building large single-page applications (SPA).

Single-page applications offer users a more immersive browsing experience. They are recommended for interactive applications. Vue.js is a great framework for building those.

Vue.js can also be used in existing web apps to improve their functionality and, for example, add some reactivity. You experience reactivity when your in-app action is immediately reflected on the screen and you don’t notice that unnerving load time where nothing happens.

Below are some of the companies which use Vue.js:

Considering its shallow learning curve and vast flexibility, Vue.js is a valuable alternative to other js frameworks out there. If you’re looking for a front-end environment that is fast and rich in functionality, think about inviting Vue.js on board of your next IT project.