We were on infoShare! 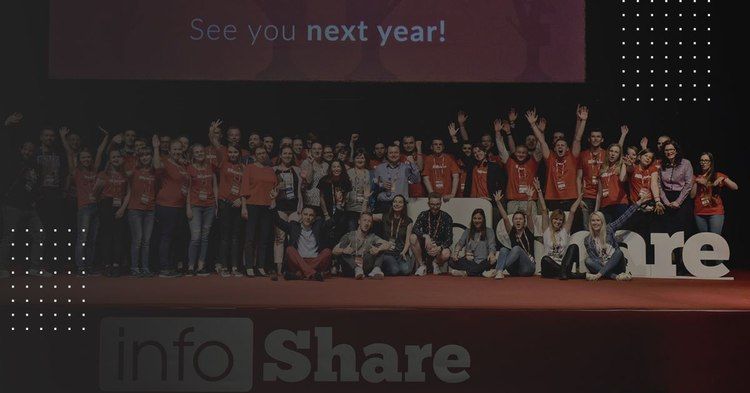 Infoshare is the biggest conference of its type in Central-Eastern Europe combining the world of IT and marketing. Infoshare is one of the best occasions for entrepreneurs to promote startups and network.

We were on infoShare!

Infoshare is the biggest conference of its type in Central-Eastern Europe combining the world of IT and marketing. Infoshare is one of the best occasions for entrepreneurs to promote startups and network.

I was particularly interested in the issues revolving around tech scene. Within two days, 23 lectures, mainly on web technologies, were given. For me, the most valuable ones were those concerning the speed of web applications, Chrome DevTools debugging, CSS fluid design, programming multiplatform desktop applications in JavaScript, and using AWS in machine learning.

During his speech, Harry Roberts from csswizardry.com pointed out the importance of responsiveness and gave several tips on how to improve it. He stated that we currently care too little about the speed of web applications. After all, being accustomed to fast and cheap Internet connection in the European countries, we often forget about testing the software for locations where data transmission is expensive and packet loss frequent. Roberts proposed using tools such as speedcurve.com to help us find and monitor weak spots in our apps. Monitoring is particularly important as it lets us compare the optimization effects with the results of the actions taken before any tweaks were made. SpeedCurve also allows us to check the website speed depending on the viewer’s location.

Charles Proxy is another useful monitoring tool. Charles Proxy helps us debug the app, showing us the whole traffic between the app and the client, then simulate and monitor the traffic via a much worse connection.

However, the Internet connection is not everything. The hardware on which we run the app is similarly important. Without going into too much detail, the best solution for devs is to simply test everything in real conditions.

An interesting alternative to bootstrap and other breakpoint-based frameworks is Vitaly Friedman’s approach. In his CSS, he uses numerous calculations that scale the appropriate elements of the website. According to him, the standard relative units are any units of vh or vw type dependent on the viewport size. Such an approach allows us to avoid situations with unpredictable viewing sizes, commonly encountered in, for example, the email view. Those of you who want to display the number of objects in a column (e.g. pictures) should use quantityqueries.com or modqueries.com to generate the appropriate CSS.

Remy Sharp spoke about debugging using Chrome DevTools. The first thing Sharp talked about was the general strategy. Here, the most important steps are replication, isolation, and elimination. Another similarly important aspect of debugging is recognizing the condition when our unfortunate bug has occurred.

The more obvious method in Chrome DevTools that simplifies debugging is mapping the local catalog that allows introducing changes to the app source files directly from DevTools.

It’s also useful to know the variables for the “$” symbol. For example, “$_” returns the value of the last function used, where “$0” represents the selected DOM element.

Writing desktop apps in JavaScript is a really interesting subject that was tackled by Felix Riesenberg from Slack. Tools that will do almost everything for us are electron and, of course, node.js. The first and most important advantage of using electron is that it allows us to write one code and create an app for multiple platforms, including iOS, OS X, Windows, 7,8,10, or Linux packets: deb (Debian, Ubuntu, etc.) or rpm (Redhat, Fedora). This approach gives programmers a literal developing slack. Examples of apps with these possibilities are Slack, Atom, or Visual Studio Code.

Yet, there are some functions in Slack for which JavaScript alone is not enough—for instance, video-conferences, which are always created in C++.

In the presentation section, the host provided a live programming session using the node.js monaco packet, Microsoft editor for developers, where he created a text editor loading files by drag and drop.

Other worthwhile lectures were on the HTTP/2 protocol and its growing market, already mentioned machine learning, usage of time series in app logs, resignation from DevOps in Dynatrace, or presentation given by Piotrek Konieczny from Niebezpiecznik—who, I’m sure, needs no introduction.