Ruby’s back on track again. This time for good? We sure hope so! 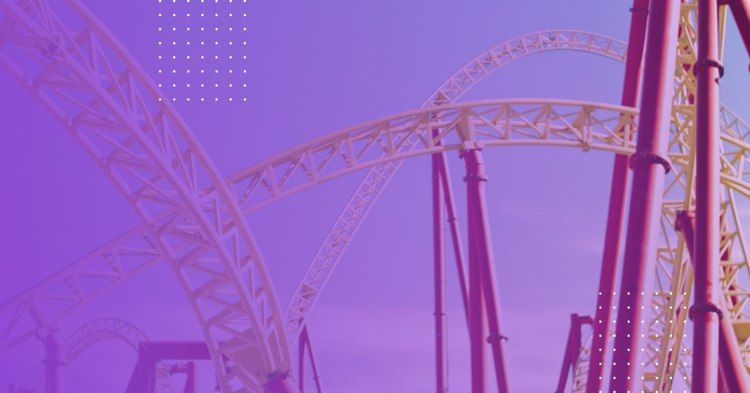 Ruby’s back on track again. This time for good? We sure hope so!

After a period of lackluster growth, Ruby seems to be gaining a foothold. Lost are those days when some industry pundits hinted at its downfall. Today, it’s steadily making its way to the top of the most popular programming languages much like it had done several years ago. And we are not the only ones who are convinced that this time it will be for good.

Ten long years (especially long for those who know just how much a year means in software development!) have passed since Ruby was declared the “Programming Language of the Year 2006” by Tiobe – the company behind the well-known popularity ranking of programming languages. The honor was the result of scoring the “highest popularity increase in a year of all programming languages (+2.15%).” The authors pointed out that Ruby, much like a then runner-up JavaScript, had managed to boost their popularity thanks to their “corresponding frameworks, Ruby on Rails and Ajax (respectively).” It was a rare case of a language rising to popularity without the help of a large corporation, but rather thanks to its “killer app.” 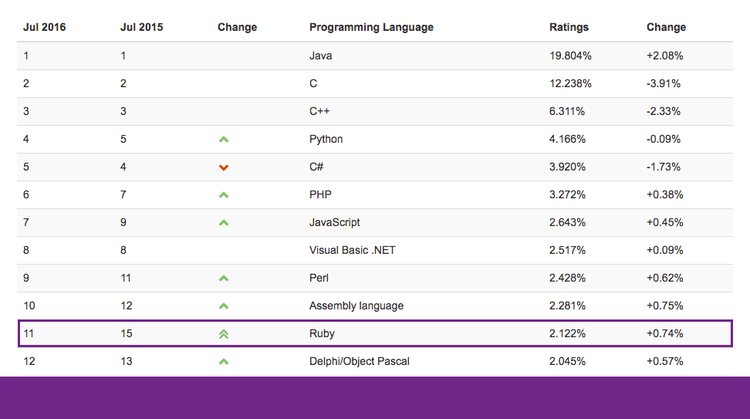 However, the next few years weren’t as prosperous for Ruby. In web development, where its Ruby on Rails framework excels, it faced tough competition from the likes of AngularJS or Node.js and its growth seemingly halted around 2008… only to return in full swing in the last few years. Today, Ruby along with its ubiquitous Ruby on Rails framework are used by well over one million websites online. Let’s find out why Ruby is getting so much love and why it is such great news for everyone.

Made to be loved

Ruby was first conceived and designed in the mid-1990s by Yukihiro Matsumoto. In one of his earliest talks about the language, Matsumoto said that he really wanted “a genuine object-oriented, easy-to-use scripting language.” A big enthusiast of OO languages, he didn’t consider any of those he had known before (Perl or Python) as object-oriented or practical enough for programmers to truly focus on building functionalities, instead of following countless syntax rules and conventions.

Matsumoto made Ruby for developers so that they would love it or, as they often say, with programming happiness in mind. He thought of it as a possible relief for Java or .NET programmers, a way for them to build complex and scalable apps faster.

Passion-driven development with Ruby on Rails

Ruby gained popularity slowly but surely, until the year 2005 when the Ruby on Rails programming framework was first released. At this point things really took off.

The combination of Ruby’s easy and clear English-like syntax with Rails’ robustness found many supporters. When compared to a lot of other popular frameworks, Rails required little initial configuration and provided plethora of out-of-the-box components, sparing you the necessity to build repetitive functionalities from scratch. If you couple it with the popular RubyGems package manager, which provides developers with the ability to publish, find and install extra modules and libraries (so called gems), you get a powerful platform that wants you to complete your project using as little code as possible, favoring short development time.

And it did make developers happy and passionate. The sheer size of the Ruby community may still not stack up against the likes of Java (Ruby was the 11th most popular technology according to Stackoverflow with 8% of usage share among this popular site’s users), but its members sure make an extremely energetic and vibrant bunch. They contribute to the Ruby language and the Rails platform with new code and new additions to their already extensive and very detailed documentations. 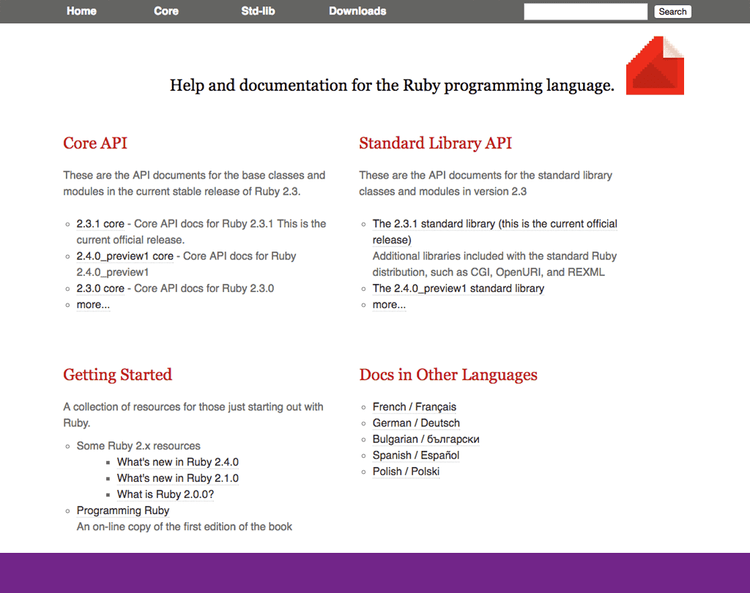 … but is this really a bad thing?

Airbnb, Github, Groupon are only a few examples of companies that picked Ruby on Rails to build their highly popular web applications. Back in 2004 it was the Basecamp web platform that laid the foundation for Ruby or Rails, being the project Ruby on Rails was extracted from. Full of ready-made components and allowing for hassle-free development, it has become the favorite of startup companies all over the world. But there may be more to why startups like Ruby on Rails so much.

There are few technologies that radiate vibes as good as Ruby on Rails. Since Ruby was once picked by many developers out of sheer curiosity for a new easy-to-use object-oriented language, Ruby developers are widely regarded as genuinely interested in self-development and constantly building new skills. They are also well known for their commitment to the Ruby community. These features make them a perfect fit for startup companies.

But since Ruby on Rails is now a mature, stable and well-tested platform, also big companies are becoming increasingly more interested, especially when it comes to web development.

For the “Agile” project managers…

Ruby on Rails also makes for a great choice for project managers and everyone who uses and believes in Agile methodologies in software development. Naturally, tools themselves are never Agile. But some support being Agile better than others.

Thanks to the availability of ready-made components and the ability to quickly develop and deploy working solutions, Ruby on Rails proves effective for teams who want to develop the first version of their product (proof of concept or minimum viable product) as quickly as possible and then improve it in an iterative manner.

With Ruby on Rails, Agile teams can work in a way that allows them to test their initial assumptions regarding a product quicker. Even the fact that rushed development and reliance on components may deny them the chance to fully understand their own product on a technical level, this isn’t that big of a deal in the initial phase. After all, there is a difference between what developers and potential customers mean when they want to find out how a solution works. As long as it does what it’s supposed to, it’s good enough to become the subject of user testing. And all that can be achieved with Ruby on Rails in little to no time and with limited funds, even bootstrapping.

…and sysadmins that love simplicity

Most surprisingly for many, Ruby is also becoming the language of choice for more and more system administrators. For some of them, it’s difficult to give up on shell scripts. But the more complicated scripts they handle, the more they appreciate the simple syntax of Ruby as well as its object-oriented nature. Its weaker reliance on tight rules gives administrators a considerable amount of much-needed flexibility, making it a perfect match for the needs of a system administrator. What’s more, some of their most favorite tools such as Chef or Puppet are written in Ruby and use the language to produce their configuration management scripts.

Ruby on Rails and… on a roll. For years to come

Ruby and the Ruby on Rails framework, its “knight in shining armor,” seem to be enjoyed by all kinds of groups, especially by those who give them a proper try. Well-designed, nimble, and full of ready-made components, they allow for fast and quality development without much fuss, making for a great choice for projects of all sizes, particularly for Agile and iterative projects that assume a certain level of uncertainty at the initial phase. Today it’s a mature platform that we have no doubt is here to stay as one of the top choices for developers, clients, project managers and administrators out there.